Blaze and the Monster Machines series

Christopher's review: Blaze and the Monster Machines is a good and entertaining cartoon series. The show takes place in Axel City, where many monster truck civilians go aout their everyday lives but not like Blaze and AJ (his human partner). They are Monster Machine (monster truck) racers, who race across land, sea and sky (maybe) ready to help anyone and solve many issues and unnecessary problems along the road with “Blazing Speed!”.

Blaze and the Monster Machines is a fun TV series to watch, throughout each episode, the pacing rhythm is good and bouncy with a funny and interesting cast of characters, and great animation with blazing creativity to watch.

In my opinion, the only comment I have on this series is the strength within the STEM segment sessions.

The STEM segment sessions, we get a brief or a small summary explanation of what the topic or object is, how that object or method works and witnessing many examples of it in action. Within these segments you get a feel of science in the form of everyday life, but the downside is that they don’t go any further or explain more detail beyond the normal understanding, how things work and using that simple basic knowledge that is against or in your favour.

Nevertheless both Blaze and AJ explain the subjects and encourage the audiences to interact with their journey and assist them for different situations. For example…

In season 1, episode 3 "Tool Duel", the subject was about ‘Friction’. So during that episode in Axle City both Blaze and AJ are at the bottom of a steep hill. Crusher (antagonist) uses his powerful ‘Mechanical 3D Printer’ device to create a ‘Super Slippery Banana Launcher’ at the top, so that he can cover the whole road with a bunch of messy splat bananas to stop them from pursuing. In that situation, Blaze explains to the audience why he slips on the bananas and explains about his tyres needing friction to touch bumps on the road to move. He compares the differences between his tyres’ reaction on both the actual road and the bananas.

During that same chase, across the sea, Blaze needs a boat that can cut through the oncoming waves with less friction. So that he can control the level of speed freely without worrying about the constant decreasing. To solve that problem Blaze needs to transform into a ‘Hydrofoil Monster Machine’. Before he transforms, Blaze asks the audience to shout out one of the component names that form into a Hydrofoil. During that segment it was really good to learn about the different parts that form these special vehicles (like Hydrofoil, Wrecking Crane, Sprinkler and etc).

In season 1, episode 1 "Blaze of Glory", Blaze, AJ and the other competing Monster Machine racers are trying to head back to Monster Dome in Axle City to make it in time for the ‘Monster Machine World Championship’ (thanks to Crusher for causing their trouble).

During their travel, Blaze and AJ meet Stripes (the Tiger Truck) who is stuck at the edge of a cliff with only a few vines to hold him from falling to his doom. Blaze and AJ need to climb up the rocky mountain to recuse Stripes in time, but to do that they need the audiences to help them choose the right ‘colour’ ramp to reach Stripes. This problem solving involves finding the right ramp (trajectory) to achieve a higher speed and get onto a higher platform ledge without picking the wrong path. I felt this segment was really good, but I wish they could talk about the word ‘trajectory’ in a bit more detail about it.

Overall Blaze and the Monster Machines is a fun series to watch and learn some scientific knowledge.

Driving the road at top speed, “Let’s Blaze!” once more. 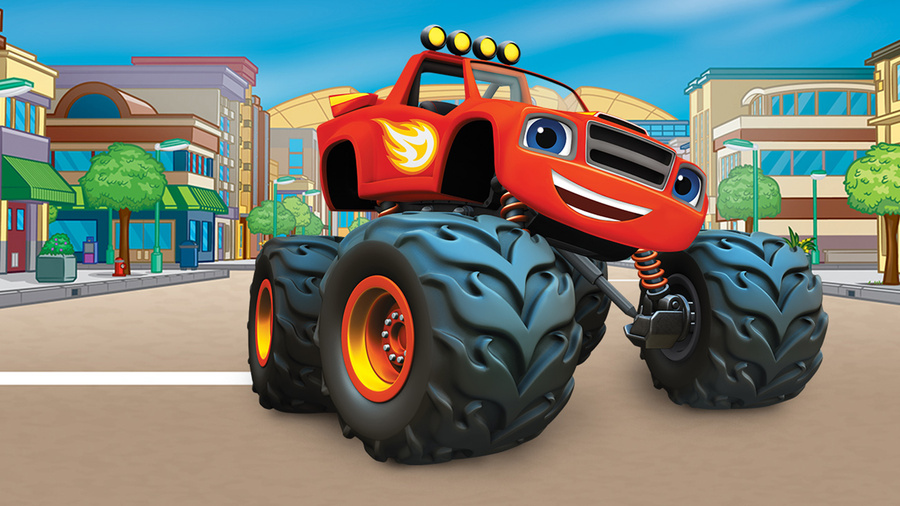 The aim of this series is to have fun whilst learning science facts. If, like me, you are eager to learn more about the topics covered within the series, you can research about them on your own, travel to a library or ask someone (that you know) to help you understand it even more.

Blaze and the Monster Machines is available to watch on: